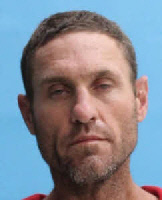 Lt. Raya was contacted by the Wal-Mart Loss Prevention Manager regarding a possible attempted theft in progress. Apparently, the suspects had loaded a shopping cart with just under $1000 worth of merchandise and placed it near the exit. Several unmarked units observed two white males, one hanging out by the cart and the other circling the parking lot. They seemed to abandon their attempt at Wal-Mart and headed over to Tractor Supply. Our deputies followed. While they perused the tools and mini-bikes, DCSO ran their tag and found it didn’t match the registered vehicle.
The suspects, later identified as Todd Williams and Gary Rister, seemed to get the hint that today wasn’t their day and left Tractor Supply empty-handed. Det. Pacheco and Lt. Raya conducted a traffic stop. Det. Friend and K9 Kita found drug paraphernalia that tested positive for meth AND a check of their licenses found both were suspended.
The driver, Todd Williams, told Det. Juan Gonzalez that they got spooked at Wal-Mart when they caught sight of a store associate and decided to go to Bradenton and try their luck there! A check of the criminal record showed a history of retail thefts and that Williams was currently out on bond for a similar theft in Palmetto.
Although there was no actual theft that day, our Criminal Investigative Division still considers this a win. Both parties were cited for driving with a suspended license and Williams for possession.
#preventioniskey #publicservice #k9

A Reminder To Drive Sober Or Get Pulled Over