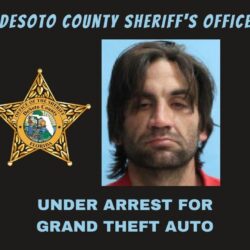 DeSoto County Sheriff’s Office received a call from ,the Highlands County Sheriff’s Office, regarding a Jeep Wrangler reported stolen from Alan Jay Ford of Sebring. Detective Whittington of the HCSO reported the suspect, who identified himself as “Alan Hopkins,” took the Jeep for a test drive and never returned. A short time later that same suspect went to the DESOTO Automall and asked that a new key be made for the vehicle he “was in the process of buying.” Employees were suspicious and after confirming the vehicle was reported stolen, contacted the DCSO. Detectives Christian Friend, Eriq Pacheco and Sergeant Matthew Proudfit responded to DeSoto Automall to find the suspect in the service bay waiting for his new key to be made. The suspect Rhett Phillip Hopkins 52 of Nashville, Tennessee, was booked into the DeSoto County Jail on charges of: Grand theft of a motor vehicle, unlawful possession of the personal identification of another person and false identification given to LEO.
#jeep #thief #badchoices #dunkindonuts #justicerunsondunkin #SeeSomethingSaySomething

The DeSoto County Sheriff's Office will participate in a... Read More.
Monday, May 23