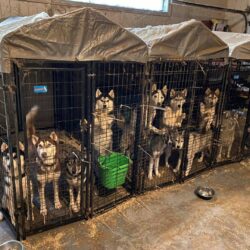 On October 28th, Sergeant Paeplow received a call from a concerned customer of Strawberry Farms on the condition of her puppy who had lost roughly 5 pounds while under the care of Rose Romano. The more Sgt. Paeplow dug, the worse it got…
The initial investigation turned up complaints from previous employees, arrests out of St. Pete and even a letter from a local vet who had to decline spaying one puppy because “she had wounds on her face… no palpable fat… ribs, vertebrae and pelvic bones easily visible.”
As much as we wanted to swoop in right then and rescue these puppies, the deputies at DCSO had to make sure all the T’s were crossed and I’s were dotted. So the case was turned over to our CID (Criminal Investigation Division) and Sergeant Bailey, who rocked out a perfectly worded warrant ensuring the judge would sign and get us in there ASAP.
This morning, all that hard work and professionalism paid off. DeSoto County Sheriff’s Office and DeSoto County Animal Control seized THIRTY NINE adult dogs, NINETEEN puppies and 26 other animals from deplorable conditions. No food or water in sight. Feces and urine everywhere.
Sheriff Potter surveyed the scene and shook his head, disgusted, “We have to do better as people. These animals don’t deserve to live like this.”
Robert Polk was arrested at the scene with eighty-two counts of neglect.
A warrant has been issued for Rose Romano for the same as well as 2 felony counts of forging medical documents.
If you know the whereabouts of Rose Romano, contact the DeSoto County Sheriff’s Office at 863-993-4700.
Puppy mills aren’t “paradise.”

The Affordable Connectivity Program is an... Read More.
Saturday, August 6